I found this post on one of my daily reads Autismville and I think it pretty much sums things up....

Amy brought me this letter today, asking if we could mail it to the President. I thought it was worth sharing.

When you said the thing about the Special Olympics, it really hurt my family. My little brother, Jack, has autism and we felt like you made a joke out of him. He's a great person. Sure, he has autism. But he's the same as anyone else in the world. I think he's the best little brother in the whole world and he shouldn't be made fun of.

I am in third grade and my little brother gets notices about kindergarten but he can't go to my school. A lot of people in public make fun of him, and it makes me feel bad. My brother doesn't even seem to understand that people think that he's dumb or stupid. He is practically normal, but it's just something in his brain that makes him different.

Really, he's not dumb or stupid at all, but he is unique.

Amy Ursitti
Posted by Lula Bee at 6:15 PM No comments:

Has it ever occurred to you?

that things could get so turned around you would not even recognize them?


that someone could view you in a way so far from what reality really is?


that people twist reality to better suit their purpose?


that things are often not what they seem?


Yes, I know I am speaking pretty vaugely here. I used to think the world was very black and white, that when someone did something very bad it was totally apparent and no one would miss it or be fooled into thinking it was OK...but that is not the case all the time. As time passes people forget, except the people whose lives have been forever changed by it, and while a sort of forgiveness may come it still does not erase what was done in the past...things are different now. But sometimes people on the outside find it benificial to rationalize those bad things when it suits their purpose and makes them feel better. That is fine but the truth remains, it does not go away.
Posted by Lula Bee at 10:38 AM No comments:

Mermaids Among Us and a bunch of other stuff 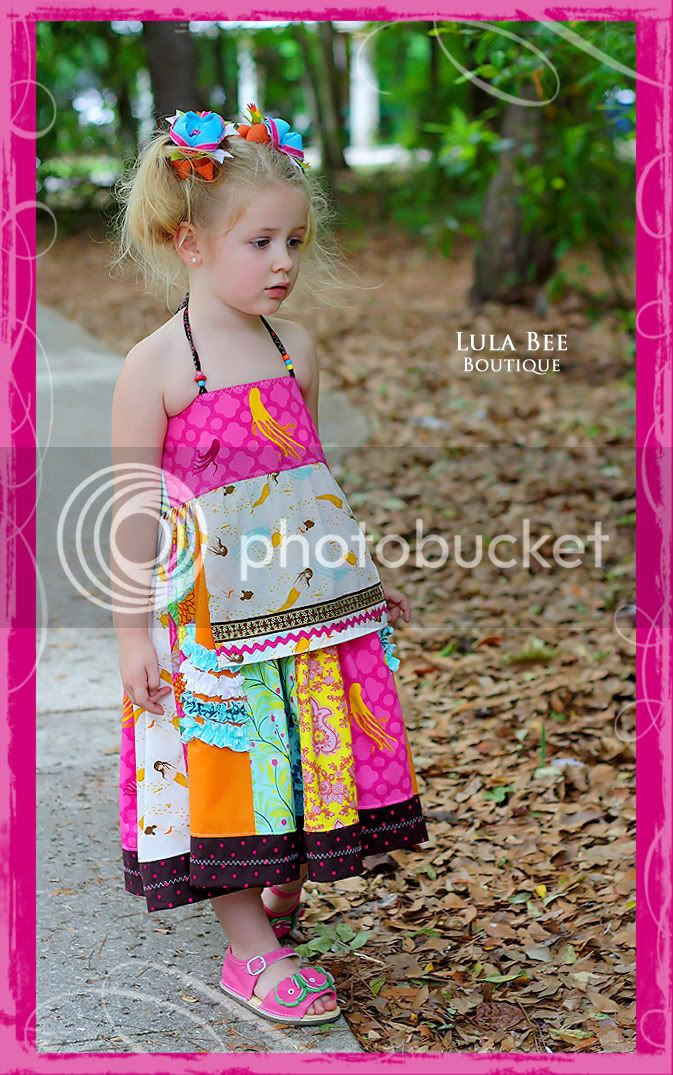 Not much time for blogging lately...seems like all I have been doing is coming in and going "Bleck, here's some pics..can you use them to decipher what is going on in my life at the moment?". When the truth is, no, for you to really be able to acurately do that I would need to post pics of my gross kitchen floor and show some images of me losing and NOT returning library books, hmmm... 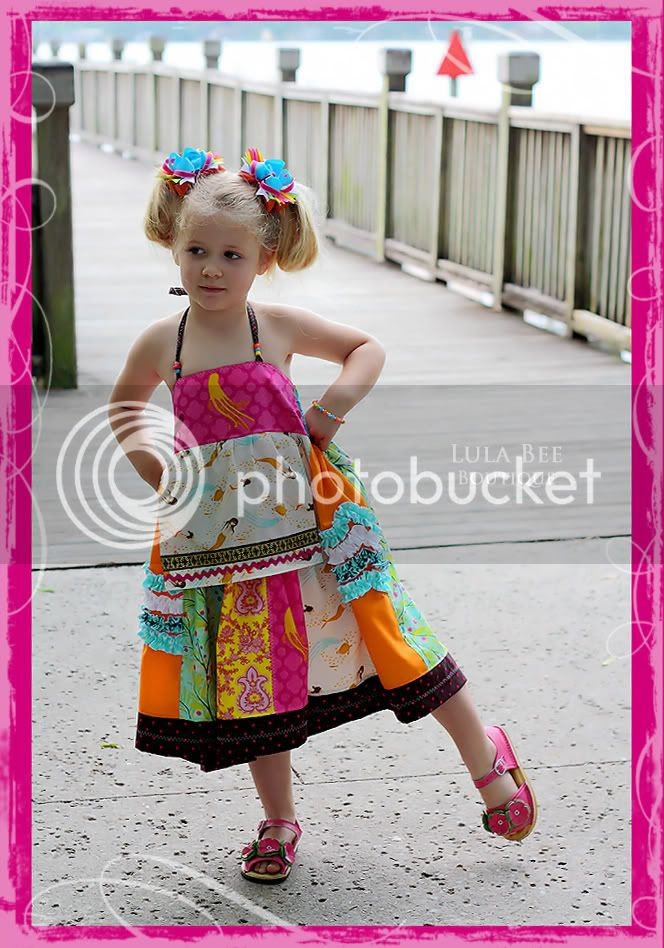 My mind is just a mess of about a million things all the time and I find myself with all these random portions of thoughts... things I would like to sit down and ponder a spell on. 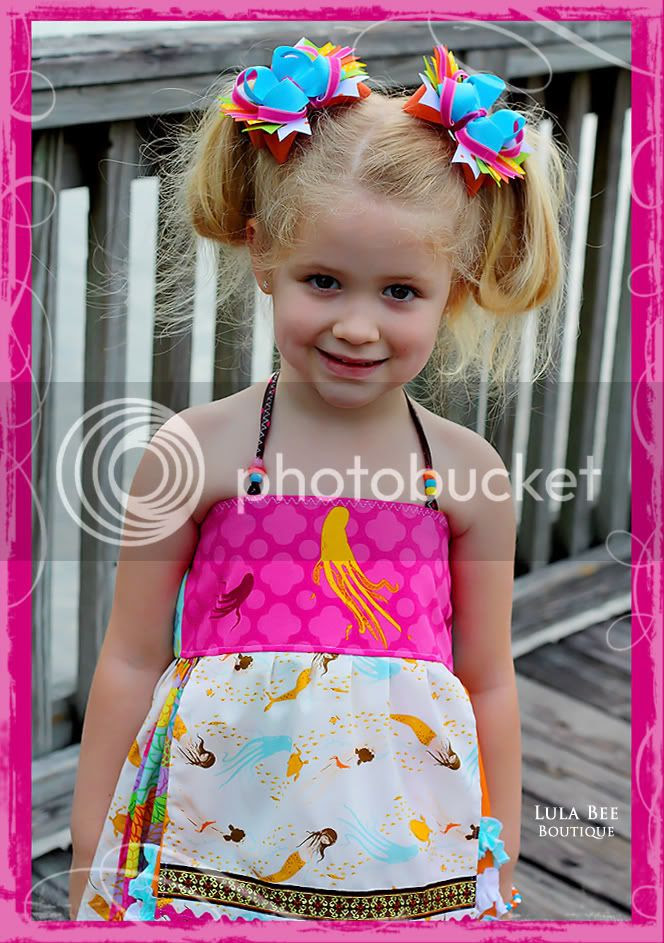 I wonder when I will be able to sit and eat a complete meal while it was still warm without having to undress and redress a polly pocket doll, look for a lost bouncy ball under the fridge, or find some clean towels (a feet in itself) to mop up the 2 litter of Dr. Pepper that the cat knocked over after it was left perched on the edge of the kitchen table by a 6 year old with a caffeine problem. I find that I do in fact eat less per sitting since by the time i get back to my plate it looks cold and considerably less appetizing than the last time I saw it. But no worries that's not helping me shed any pounds. I find myself back in the pantry pretty soon afterward getting out another morsel of something i will be unable to finish as well. 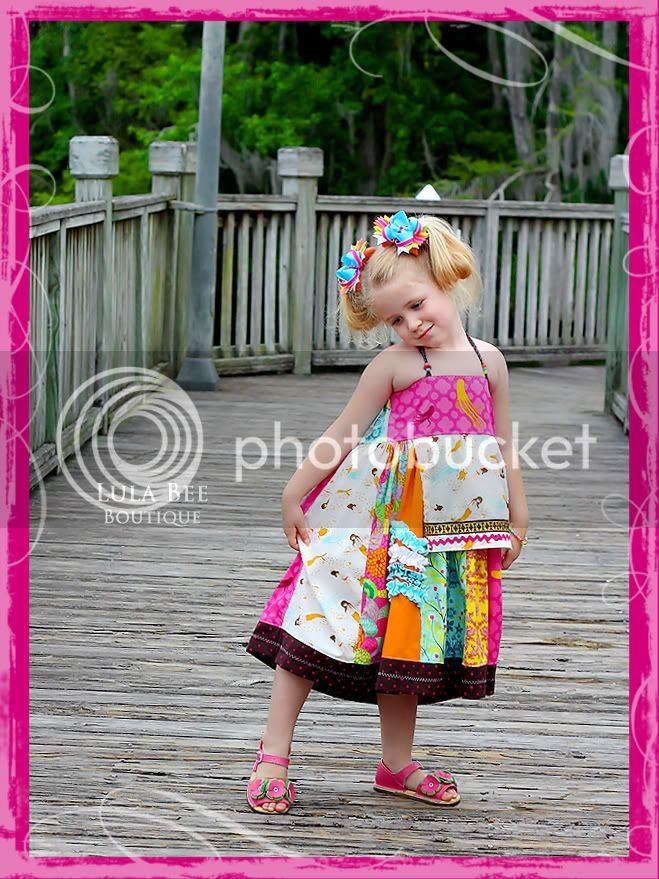 We went on a very fun vacation over Spring Break to Chattanooga to take in all the touristy spots- Ruby Falls, Rock City, the Incline Railroad. I am still reeling over the fact that we did it with no major incident...it was just plain ol fun! I would have blogged it in my copious spare time last week had I not gotten an email from Photobucket recommending that I upgrade to their Pro account (you know that one you have to PAY for- as IF!). They seem to think that I am running out of something called "bandwidth" and soon all my imagines will explode and be no more, which would be bad for my auctions. So at first I sat stuptified because my brain doesn't have a lot of spare room to contemplate unexpected problems that do not involve small plastic objects or things that cry. Then I went out and created several more photobucket accounts (and hijacked my husband's) so now I am hoping my "bandwidth" (whatever that actually is) will be expanded enough to hold all the photos. 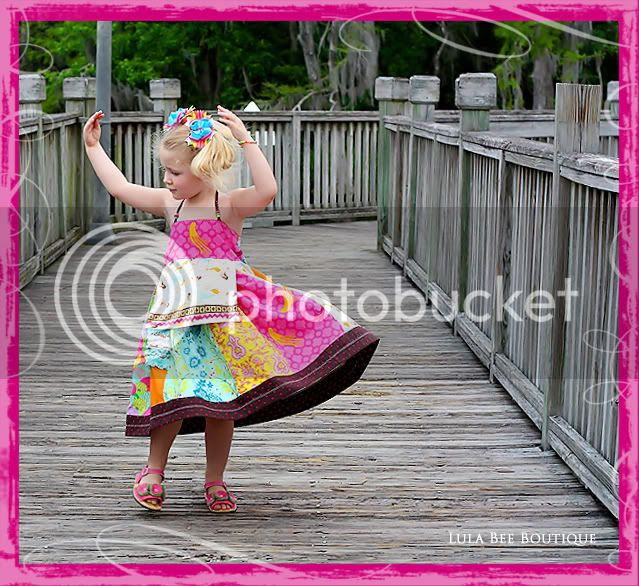 So much going on! 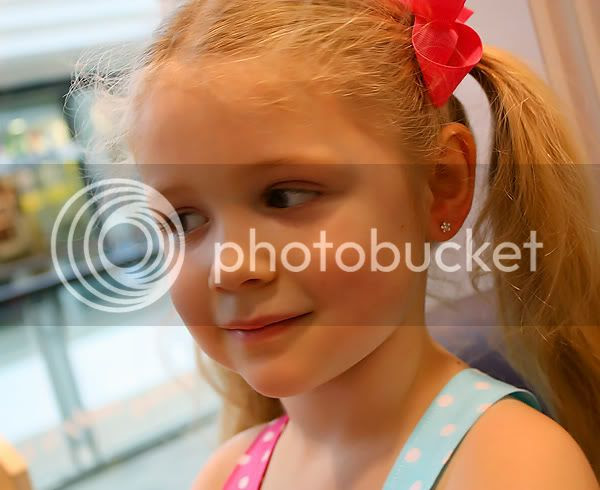 For as long as I can remember, my L2 has NOT wanted anything to do with getting her ears pierced. I have not pushed or prodded her along in any particular direction (although I have secretly been wanting to see some sparkles in those tiny ears), but when she was 2 and saw her little baby cousin with earrings she wanted to know if it would hurt...I didn't lie, but I tried to not make a big deal about it either.

Well, on our Disney encounter with little Emmy and Rilyn she noticed that they both had some sparkley earrings of their own. Little Emmy even told her that it only hurt this little bit (picture tiny fingers pressed together). So that was enough for her...the need for earrings has been strong since then. 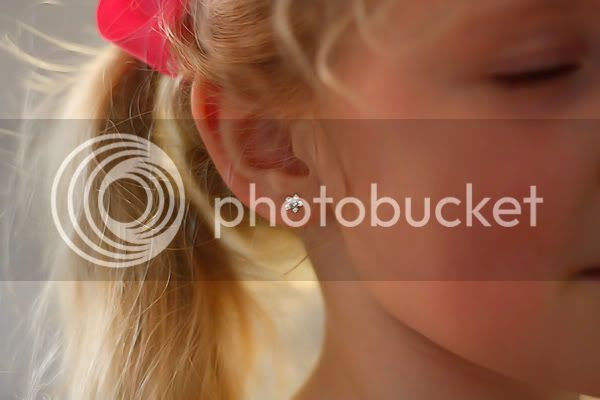 I was fully prepared for the worst though when I heard that the Claire's at our mall only had one worker person til later in the day, meaning she could not have both ears done at the same time. She had a Baby Sleeping Beauty and Baby Prince Phillip sitting in her lap and the promise that she could take them home as soon as BOTH ear#1 AND ear #2 were done. Only one ear = no Babies leave the store.

I don't know why I even worried though, she wanted those sparkle flowers earrings more than anything and did not even flinch when each ear was done. I was ready for the full on crying and she did not even shed a tear! Four is such a wonderful age! 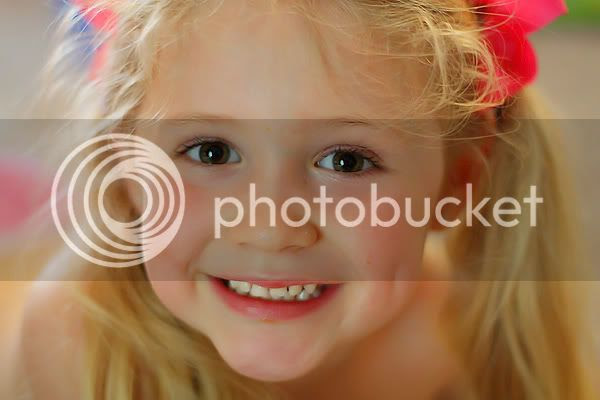 This one of course does not even show the earrings, but just look at how happy that girl is to have them!
Posted by Lula Bee at 8:17 PM 4 comments: 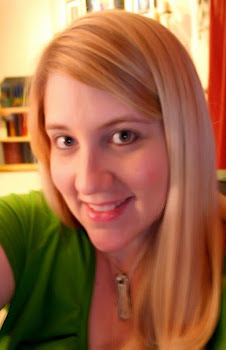 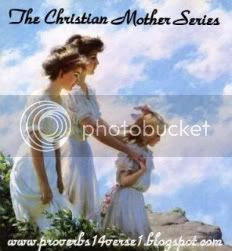